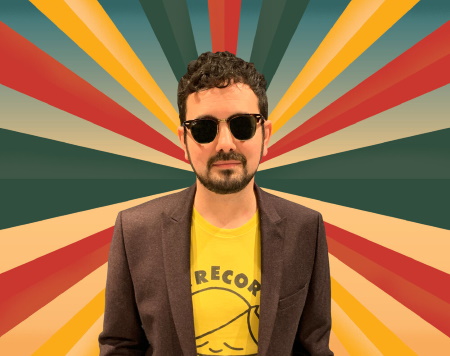 English multi-instrumentalist Nick Frater used elements of American power pop, West Coast harmonies, and a homegrown sense for melodic psychedelic pop on his new album Fast & Loose. He is a contended guy, who recently became a father (don't worry - no overdose of sappy songs about toddlers and such). He uses keyboards both as a lead instrument and an extra layer of percussion, plus some rock guitar to retain his street cred badge - Frater touches base with his musical heroes - That Ship Has Sailed and Would You Like To Go? have "Brian Wilson" written all over it. And there is "blink-ánd-ýou'll miss it" nod to the Olivia Newton John's over the top disco smash Xanady in Let's Hear It For Love.

Any power pop artist who is worth is salt can't escape the shadow of Alex Chilton and sure enough, he get his due with Cocaine Gurls. Frater is proudly out of sync with current mainstream trends. That is a good thing, because trend followers find themselves in the cut-out bins almost overnight when the nest fad comes along. Fast & Loose is an album for people who have the patience to immerse themselves in it as a "Gesamstkunstwerk", not letting their ears be controlled by streaming services algorithms.